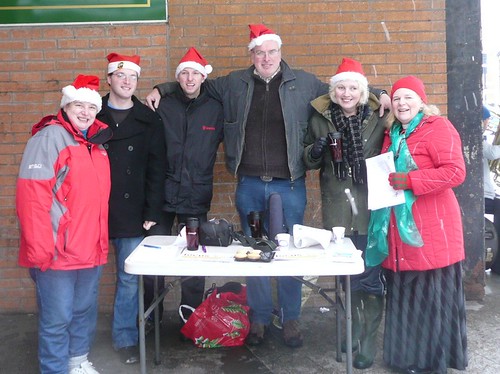 Local Councillors were out in force spreading Christmas cheer at the Longfield Centre on Saturday 18th December, as the regular Liberal Democrat Saturday Surgery took on a decidedly Christmassy flavour.

Councillors from all three Prestwich wards were on hand as usual on Saturday morning, but donned Santa hats and handed out free mince pies to shoppers and local people who came down to take part. Richard Baum, Liberal Democrat Councillor for St Mary’s ward, said “We have a surgery at the Longfield Centre every Saturday morning from 10.45 – 11.45 come rain or shine. The snow didn’t deter us on Saturday and we were in the festive spirit with our hats and pies. There was even some mulled wine to keep us warm.”

Richard continued “There’s a serious purpose to these Saturday Surgeries. We are here to listen to local people and try to help with any problems they’ve got. We’ve also got the “Scrap Prestwich Parking Charges” petition for people to sign, and over 2,000 people have done so far. We’re also asking people their priorities for Prestwich so that we can make sure we let the Council know what needs protecting when they make cuts to deal with the deficit and debt. But we’re also here to wish everyone in Prestwich a merry Christmas, and I was pleased that so many people went away smiling with a mince pie and our Christmas best wishes.”

The Saturday Surgery series will commence again in early January after a fortnight off for Christmas and New Year. In the meantime, Councillors are available by phone or email over the holidays.