In the ‘media quiet’ days before Christmas, the Government awarded an additional set of Fracking licenses to private companies. Threes of these license blocks cover the Bury area, including one which covers parts of Prestwich.

License areas 70, 80 and 81, which includes a part of Prestwich, Whitefield, Bury, Radcliffe, Ramsbottom, Tottington and and then right across towards  Bolton have been awarded to Hutton Energy Ltd for exploration. 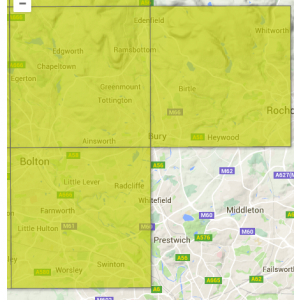 Fracking, or ‘Hydraulic Fracturing’ is where underground rock is fractured by the high pressure injection of ‘fracking fluid’ to create cracks underground where natural gas can be released.

Residents will be aware of campaigners in many other parts of the country (e.g. in Lancashire) being very opposed to fracking sites near them.

Fracking is a controversial subject – there is more information about the environmental impact that Fracking can have at the Greenpeace website here.
http://www.greenpeace.org.uk/climate/fracking

You can help us campaign to Bury Fracking Free by signing our online petition here.