Hidden amongst the tax-cuts and other announcements in last week’s budget, was a significant reduction in funding for some important public services, particularly the NHS.

An investigation by Liberal Democrat MPs has found that changes hidden in the Budget will mean the NHS has £650m less to spend on front line services. The research on the budget, based on analysis from the House of Commons Library, reveals hidden changes to public sector pensions, passing the cost directly to the health service and other public sector bodies.

Plans to reduce the public service pension scheme discount rate will raise the Treasury around £2bn from 2019/20, but passes the cost directly to the employers. The NHS is one such employer and their share is estimated to be around £650m.

The changes will also see teachers’ pension contributions rise by £426m, the armed forces by £314m and police forces by more than £100m. This is an unbudgeted cost will take money away from front line services to pick up the bill.

Liberal Democrat Leader Tim Farron said:
“Even by George Osborne’s standards, this is a vicious attack on our health service, schools and public services. He made grand promises about funding the NHS and is now making secret cuts by the back door.

“George Osborne cannot pull the wool over people’s eyes. Choosing to ask schools, hospitals, and forces to pay £2bn extra in pension contributions has a real cost, and vital services will have to pick up the bill. 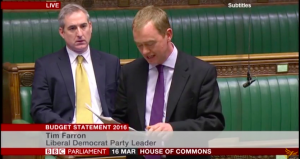