Liberal Democrat members voted to ban fracking in England and Wales at the party’s Spring Conference in York today, the mainstream party in England to do this. (Policy on this issue in Scotland is made separately as a devolved issue.) 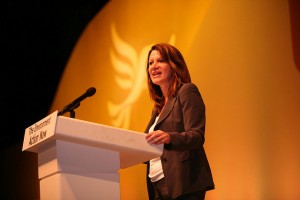 “We need energy security. We need sustainable energy. We need to meet our legally binding targets. Fracking will not deliver any of these. But it will deliver greenhouse gases.

It is not logical or sensible to develop fracking at the very moment we have signed up to the Paris agreement on climate change, and announced the end of coal. By the time fracking becomes a significant force – 2030 – Britain must already be very low-carbon”.

Fracking is not the solution to the country’s energy problems. The Conservatives are now rolling back the green agenda which Liberal Democrats fought hard for in government. We need to focus on long term sustainable goals like achieving a zero carbon Britain by 2050, not carving up the countryside for short term gains.