Liberal Democrats on Bury Council were last week successful in getting Bury Council to take a stand against the Investagatory Powers Bill (sometimes referred to as the ‘Snoopers Charter’).

There are three issues that particularly concern us:

– the Bill would require all communications companies (e.g. Internet Service Providers and telephone companies) too keep a complete record of our electronic communciation for a whole year (email,s instant messages, web browsing history, gaming, etc etc). With something like a mobile phone this effectively means a record of where we are, as this data is being sent continuously to our phone company. It means asking companies like Talk Talk (who lost a large amount of its own customer data not long ago) to keep this information and us trust them that it is secure.

– a lack of properly resourced judicial oversight over the Home Secretary, to make sure that any surveillance that is done is approved in a very and proper legal process.

Lib Dem councillors proposed a motion, which raised serious concerns about the Bill. This was then supported by all Labour and some Conservative councillors and has now been successful in becoming the policy of Bury Council. 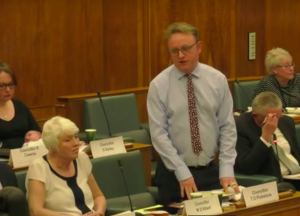 One thought on “Saying ‘No’ to the Snoopers Charter”